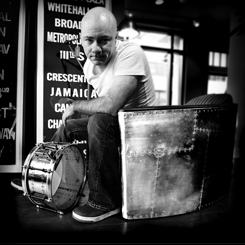 There is a reason you are here reading this. No artist, no musician seeks out what they already have. You're reading this because this is another step along the road of your journey in the art of drumming. Everyone's experience is different, but ultimately we are exploring ways to express and define ourselves through our music. The need for for an instrument that can rise to your demands and expectations is why you are here. And you are where you need to be.

For my part in your journey, it goes something like this...Half of an old saying goes "imitation is the most sincere form of flattery." The lesser known other half says "invention is the most sincere form of criticism." The existence of Dunnett Classic drums can attest to both of those adages. It's a big part of the reason why I started working with drums in 1978. As a drummer, I was unsatisfied with the products that were available and began modifying other manufacturer's shells and hardware, doing refinishing, bearing edges etc. It became a labour of lust! By 1994 I had designed, developed and built several prototypes based on my own rather unorthodox concepts, simple innovation and what I felt was lacking from existing products (including the creation of the planet's first titanium drum). The end result of that work resulted in the perfection of Titanium and Stainless Steel snare drums. Those instruments ended up in the hands of some very capable drummers, producers and studio engineers. The positive feedback was overwhelming-as was the demand for more.